The Shiny New Empress of Karachi

A week back a friend posted a picture smiling next to a lush green park with a beautiful Victorian building at the back. I thought he was in England. When I looked closer, it was Empress Market. I couldn’t believe it – I had to see this with my own eyes.

I finally made it there a few days back. The guard uncle told us that the meat area is being turned into a library/museum. 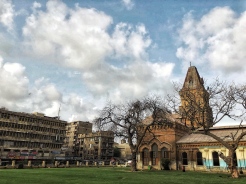 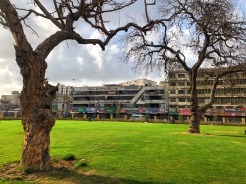 This doesn’t sound right at all. Empress Market is chaos, texture, sound, smell, taste, touch, nostalgia all rolled into one magnificent experience.

Anyone who has grown up in or even visited Karachi has some kind of memory of Empress Market.

A go-to veggie and spice shopping stop for many bulk buyers, an essential weekend trip for the loyal local and a “must-take-our-foriegner-friend-to-show-authentic-Pakistani-culture” pit-stop for others. Aside from photographing and gathering stories for Humans of Karachi numerous times, I got the love of my life, my pet cockatiel, Pavo, from there.

This gorgeous one hundred and thirty one year old place with history so rich that we have barely scratched the surface discovering is going to be gentrified. This is not necessarily a bad thing if it’s done right. If certain considerations are kept in mind and if the people who inhabit the neighborhood benefit in some way. Restoring the market to it’s “former glory”, as what has been advertised by the anti-encroachment drive, is a loaded and complex concept. Which past glory is being referred to here? Before or after Zia’s Regime (1977)?

Back in the day, Saddar was a booming artistic hub catering to diverse communities. Cinemas, bars, clubs, cafes and music schools made this city centre a multi cultural hub. But then the 80’s happened. Over the last 30-40 years, nearly 1700 shops illegally popped up outside the market. The organic growth thrived (through extortion), unchecked by authorities, till 2018 when the Supreme Court ordered all of them be removed immediately.

This new culture that Pakistani’s had come to accept and enjoy as part of Karachi was under threat. Within days, four major markets that had over the years blended in with the original master plan were demolished amongst protests from shopkeepers who had been paying rent to KMC and had deals in place. They say 200,000 jobs were affected. New deals were offered and the job was done. The razed set ups found new streets close by to occupy.

Saddar suffered amidst the heavy machinery and demolition. The area lay devastated for a while. I avoided going there because I could. Others were not that lucky- friends who lived there were distraught. Articles were written, conversations were had as plans were being drawn up by the authorities on the future of the reclaimed land. I am still not certain what the future holds for this place – we have heard many things. The only hope is that the government involves architects and heritage consultants to move forward with any plans because what this city needs to preserve and restore is Saddar’s character as a multi-class and multi-ethnic city centre. With Empress Market being at the heart of this hood, it is crucial that its future not be taken lightly.

So what can we do to help? People like you and me?

We can be aware. Be concerned. Talk. Read up and discuss the matter with family, friends and colleagues. Ask questions. Start a dialogue. Make art. This is our city, it is our job, our moral burden to care about what happens in our space because if we don’t take ownership now, we won’t have a right to complain later.

The Future Of Karachi’s Saddar

An Elegy for Karachi’s Empress Market

The Changing Face of Karachi

Khaula On The Move